Why is There Always Lint in my Hair and Brush? 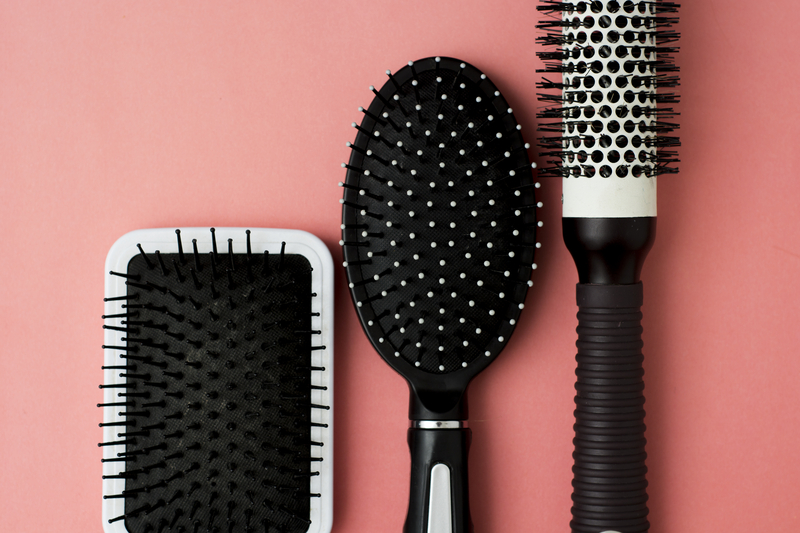 Brushing your hair is a pretty normal activity. Most of us do it daily, multiple times a day, with little to no error in the routine. But what happens when you start to notice your brush isn’t just filling with your hair, but with little pieces of lint as well? You may initially think it’s dandruff, and while dry skin can definitely contribute to hair lint, that’s not actually all that it is. Follow along to find out more about why we get hair lint and how to get rid of it and prevent more!

Hair lint is caused by a multitude of different factors. Typically it’s a combination of dead skin cells and sebum, along with old hair and product residue. The dead skin cells typically come from your scalp, and that’s where the gut instinct of “this is dandruff” isn’t necessarily far off.

However, dandruff is caused by severe scalp dryness, and lint is from your basic, every day shedding of dead cells that get caught up along the strands of your hair. Then, add in the sebum that comes from your hair follicles and now you’re starting to see the makeup of your hair lint. The next ingredient is dead hair itself.

Because hair often breaks and falls out at different lengths, it ends up getting balled up with the sebum and dead skin cells, creating the bits of lint you find in your hair brush. Finally, all of those amazing hair products that we use with such amazing intentions like heat protection, moisturization, and more, add up. They get crowded up on the scalp and eventually lend the final hand in hair lint creation.

Why does hair attract lint?

Because everyone’s hair is able to create lint, it’s not really “attracting” it. You’re just living your life and lint happens. It is what it is! Certain hair types or beauty habits may create more lint in your hair than in someone else’s, though.

For example, really thick, curly, and/or dry hair may be more susceptible to hair lint than thinner hair with more moisture as there’s not as much to keep it from shedding out.

Is it normal to have lint in your hair?

The short answer to this question: yes! It’s perfectly normal. Now, just because it is normal doesn’t mean you want it to be this way, so we’ll go through different steps and products to help you prevent it. But keep in mind that everyone is susceptible to hair lint because everyone sheds skin cells, sebum, hair, and product. It’s not weird or gross or wrong. It’s totally normal to have it.

You do want to work to minimize it, though, especially if you’re noticing it becoming a growing problem. Hair lint, because of what it’s made up of, can lead to bacterial growth on your brush. Make sure that when you have some you clean your brush out well so as not to damage your scalp, hair follicles, or hair strands themselves.

How do you get rid of hair lint?

Once you notice the hair lint, you probably want a solution to getting rid of it. Luckily, there are a couple of things you can start doing to minimize the production of lint in your hair. The first step is to clean your brush.

Cleaning your hairbrush might start with removing all of the old hair from it, but that’s certainly not where it ends. In order to kill any bacterial growth that may be occuring because of the dead skin and hair build up, you’re going to want to sanitize it as well.

This can be done a number of ways, but the first and easiest is to clean the brush of old hair, then mist it down with an aerosol hand sanitizer spray, or a mix of apple cider vinegar and water. Let the brush dry completely overnight bristle-side down before you use it again.

If you haven’t cleaned your brush in a while (or, let’s face it, ever) you may want to opt for the deep clean. To start, just take out all of the hair from the brush like you would for the quick clean option.

Then, fill a bowl with warm water and some shampoo and swirl just the bristles of the brush through the water until all of them are sudsy.

Next, using a toothbrush with a bit of the same shampoo on it, brush all around the bristles making sure to scrub thoroughly. Rinse it with clean water, then spray it down with the sanitizing spray and allow it to dry bristles down overnight.

Once you’re working with clean brushes, it’s time to use those to get the lint out of your hair. Using a fine toothed comb, separate the hair into sections. Starting at the root, slowly begin brushing down the hair strand. As lint appears, collect and dispose of it. Repeat with each section of hair until you’ve combed carefully through your whole scalp.

Since washing your hair often can strip it, sometimes we might go a bit too long between washes, which can lead to more hair lint. As a part of getting rid of the hair lint, we need to truly and simply… wash it. Try using an all natural, clarifying shampoo all the way down to the scalp. If you have really thick hair, you may want to section it off or even shampoo it twice.

Follow with a moisturizing conditioner, being careful not to get it into your scalp to avoid oiliness and product build up (which is what we’re trying to rinse out in the first place).

How can you prevent lint?

As with anything, prevention is key to getting rid of hair lint (while keeping in mind that a little bit is natural). If you’re looking to keep it at bay, follow the next few suggestions for a clean, lint-free hair brushing experience!

This may feel redundant at this point, but it really can’t be overstated: keep your hair tools clean and sanitized! By doing the quick sanitation practice once a week or so, and the in-depth cleanse once a month. This can help prevent bacterial growth and keep your scalp clear of buildup, thus reducing the presence of hair lint. It can be a bit time consuming, but try making this a part of your weekly beauty routine.

As a bonus, it’s a clarifying shampoo so it’ll actively work to remove buildup, all without harsh chemicals and drying alcohols. If you’re looking for a more traditional shampoo approach, try OUAI’s Detox shampoo. It harnesses the power of apple cider vinegar and keratin, giving your scalp a nice deep clean and your hair a healthy boost.

If a shampoo bar isn’t your thing or you aren’t sure about OUAI, talk to your hairstylist! Salons often carry amazing clean products that can help you in your hair care journey.

Avoid buildup and overuse of product

Sticking with clean products beyond just your shampoos is also a good idea. Avoid too much unnecessary chemicals, fragrances, or additives, as all these do is dry out your hair and crowd your scalp. This can lead to too much buildup, excessive oil, and extra shedding of cells and hair, all contributing to the buildup of hair lint.

Another thing to avoid in your prevention of hair lint is too much hair oil. While we know dry hair may be more susceptible to hair lint, you also don’t want to over oil it. This can cause an imbalance in your scalp’s sebum production, thus contributing to greater skin and hair shedding. All of it, plus the extra oils and hair products, get bundled up together and caught up in your strands as hair lint.

Overall, no matter how much hair lint you’ve experienced, or how long you’ve experienced it, there is a way to help reduce it. By keeping your tools, especially your hair brushes, clean and sanitized, you protect your scalp from bacterial impurities.

Getting rid of excessive hair lint may be tedious, but it’s possible with combs and natural, clean shampoos and products. Finally, keep in mind that prevention is key and what you put in your hair matters. The cleaner the product, the cleaner your scalp, and the cleaner the scalp, the fresher the hair!